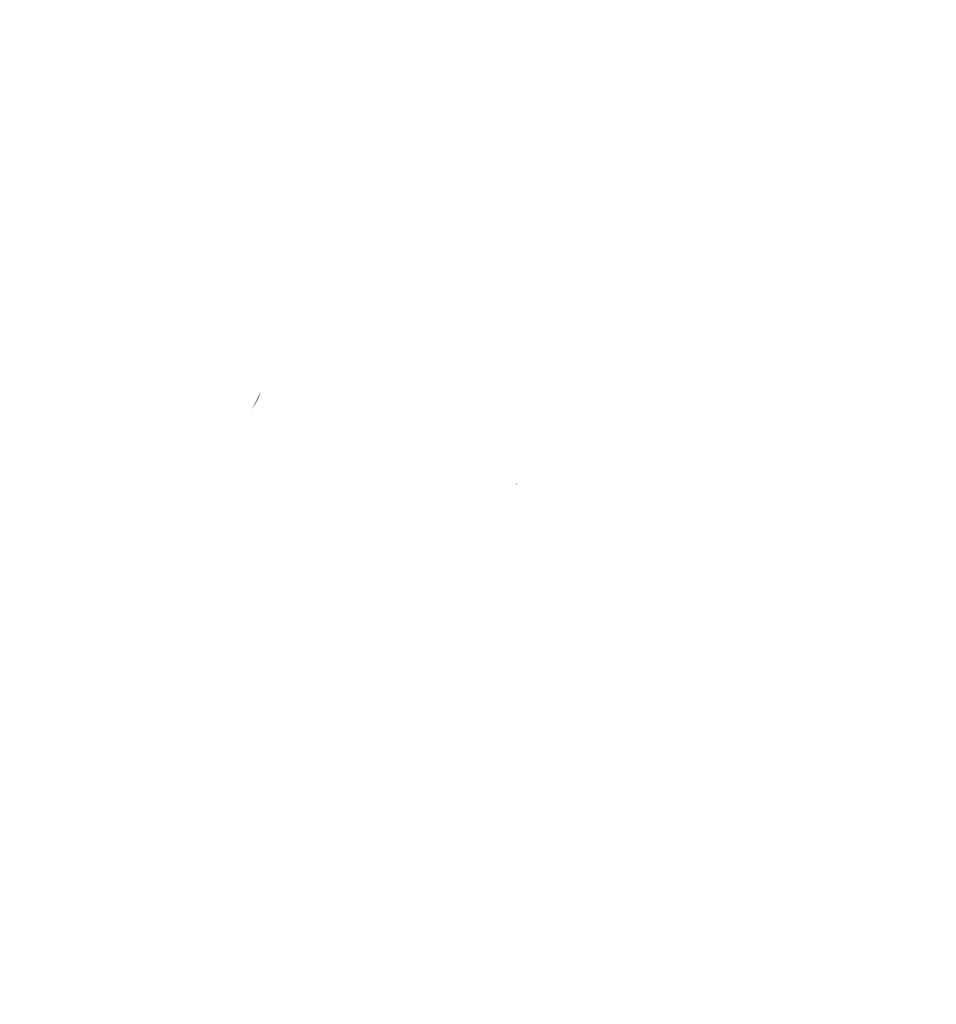 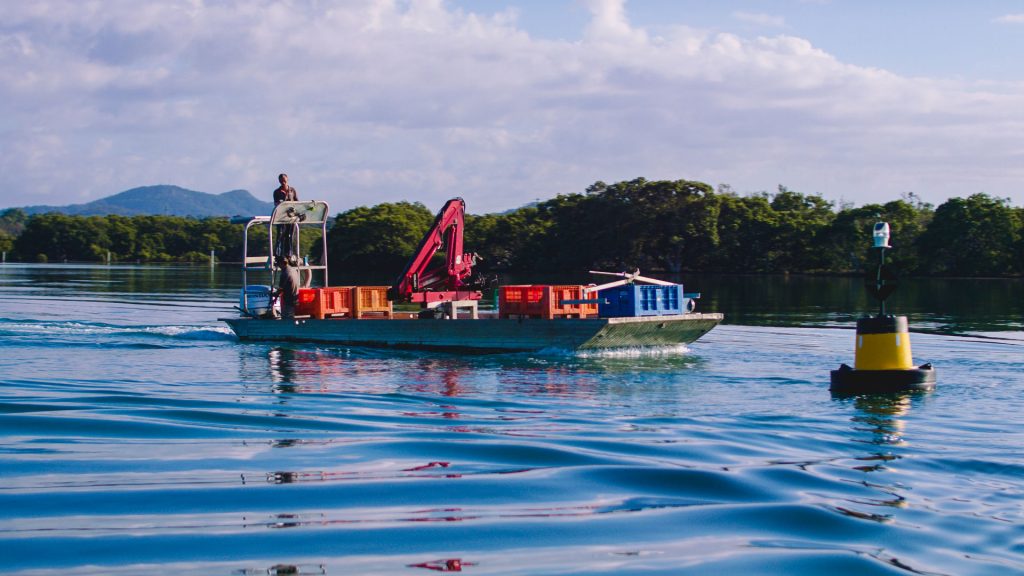 Taste the Camden Haven in every bite

A sheep farmer from New Zealand travelled to Australia for a working holiday in the mid-1960s. He stumbled on a pearler job and built a life and legacy for his family, which is an icon of the Camden Haven.

Rob Armstrong, and his wife Jenny, landed in Australia and found work with an oyster farmer on the George’s River in Sydney.

“After I started working for him, I moved to Port Stephens to work on his leases there and the next thing I knew, I was an oyster farmer,” Rob said.

Armstrong Oysters began in Port Stephens, on the Hunter Valley coastline of NSW, in about 1967.

When the leases were sold Rob, with a young family in tow, moved further north in 1978 and began his oyster farm in the Camden Haven River.

He purchased more leases and his sons Jason and Brandon would play around the shed and help their dad when they were in early primary school. During high school, the boys would come straight from school to the leases to work.

Brandon and Jason learned many lessons from their father and now run Armstrong Oysters in the Camden Haven with other leases in the Nambucca, Port Stephens and Pambula. 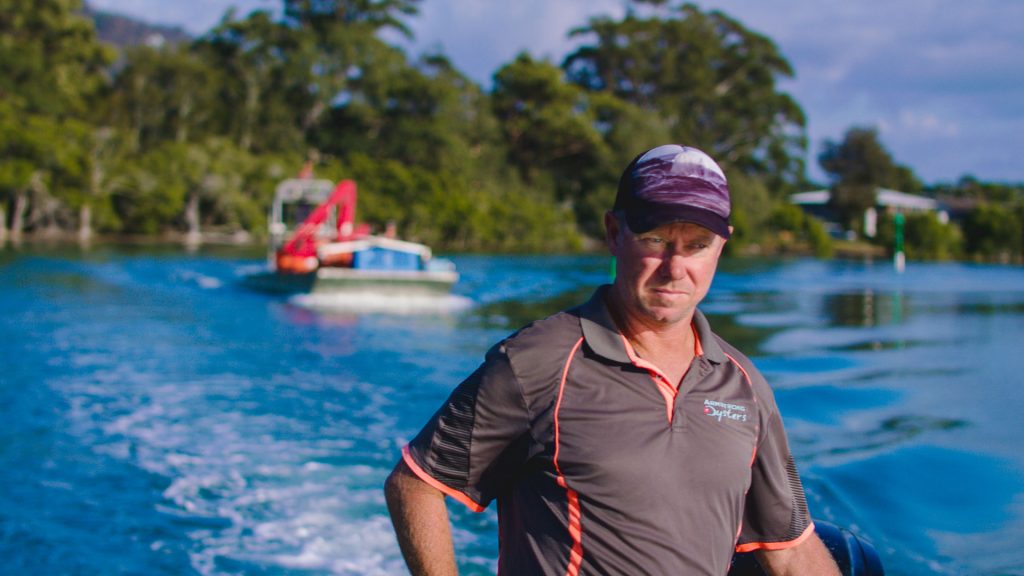 From tar sticks to tech from New Zealand

From tar sticks to tech from New Zealand

When Rob Armstrong started working in the Camden Haven River, wooden sticks were covered in tar and placed on racks in the river to catch oysters.

When oysters spawn, the larvae float in the estuary for 21 days before laying feet and nestling onto surfaces in the river, like rocks, moorings, and mangroves, to grow.

“The tar helped they oysters attach to the sticks and also stopped any grubs boring into the timber,” said Rob.

“If we didn’t use tar, the oysters would attach to the bare wood. When we tried to knock them off, the back of the oyster shell would break exposing the meat killing the oyster.”

Following tar, oyster growing progressed to concrete-covered sticks. This resulted in an increased number of oysters attaching. The Armstrongs were happy to see tar become history.

“It wasn’t good for the environment, but that was all there was in those days,” Rob said.

Nowadays, most oysters are caught on plastic slats as well as in hatcheries on land.

“The way we handle the oysters now is completely different to the tar stick days,” Brandon said.

“What is a real game-changer right now is technology from New Zealand which came in only 12 months ago. It gives us the ability to handle large volumes of oysters with minimal effort.”

Camden Haven locals and visitors may have seen black pod shapes in the river at some oyster leases. These mark a system of baskets designed to enable oysters to stay in the river system, rather than being brought back to land to be knocked off the slats to grow out in pools.

“We go out daily to maintain the oysters in the baskets to flip them, feed them, dry or fill them,” Brandon said.

“All the work is done when we are out on the water.”

Armstrong uses a mix of slats, the new baskets, has leases in other estuaries, and genetically grown oysters to maintain continuous production of succulent seafood for their customers. The genetic selections of fast-growing oysters help the shape and condition of the product.

“We have a mix of wild-caught and our hatchery-grown oysters. It all works well in case one fails,” Brandon said.

“In the genetic selections, we pick the oysters that look the best out of a random group and work off those traits.

“Those oysters will be sent off to a hatchery, and when they spawn, we buy that spawn back off the hatchery. We buy them in one millimetre in size, put them in our little upweller nursery on land for six to eight weeks to protect them from predators. Then we put them in Googlies Lagoon and they’ll grow our there in the baskets.” 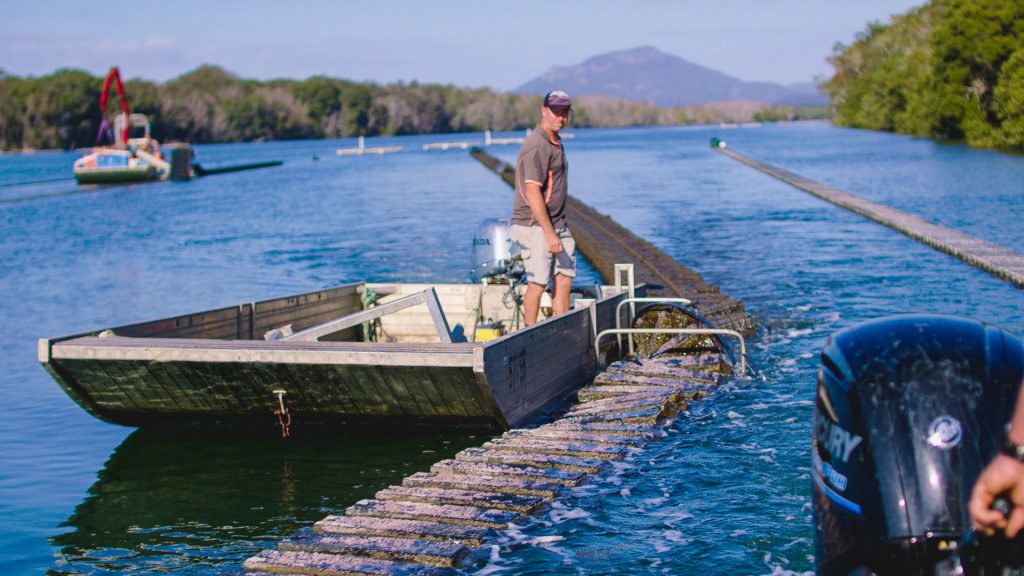 The process for the wild catch, after the spawn has caught on the Armstrongs’ plastic slats, is to strip the tiny oysters from the slats, separate the ones that settled clumped together and then place them in the growing areas of the lease.

Armstrongs has 40-45 hectares of leases in the Camden Haven River, plus more than 50 hectares in Nambucca, Port Stephens and Pambula on the South Coast. Oyster farmers have teamed up to support each other and the industry through Blue Harvest. The organisation supports oyster farmers with marketing, networking and farm gate pricing.

Together the farmers lift industry standards and Blue Harvest lifts the profiles of farmers.

Armstrongs collaborate with local oyster farmers, when possible, to lift the profile of the industry, the product and the Camden Haven. The Armstrong family is passionate about giving back to the community, not only sponsoring local sports teams but giving their time and equipment every year ahead of Clean Up Australia Day as part of the Tide to Tip waste initiative.

Rob chose to set up business in the Camden Haven because the catchment is small, which means the water contains few contaminants running off from upstream land users and industries.

Now, Armstrong Oysters is one of the largest Sydney Rock Oyster farms in Australia. Jason and Brandon work hard to monitor the health of the river systems in which they work.

“They say that an oyster is like the canary of the river: if your oysters aren’t going well, then there’s something your estuary,” Jason said.

“We run a pretty strict program. As soon as we get 40mm of rain, the whole river shuts down, we can’t harvest anything, and then we go out and do a series of tests, we can get the problem fixed. Once those tests come back fine, then away we go again.

“We test the water every month and make sure the river is clean. We can pick up on any problems early and act quickly.”

Rob said he is pleased with the growth of Armstrong Oysters and how Brandon, Jason and their families have contributed to its success.

“Success won’t happen unless you work.”

Being a business with a long history of producing many millions of oysters, Rob, Brandon and Jason must know a thing to two about shucking. 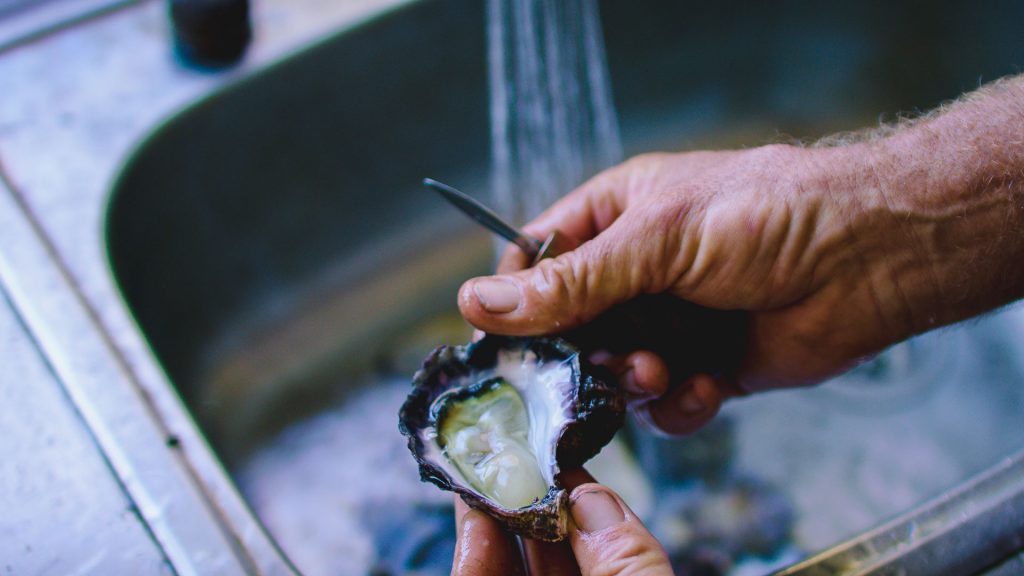 Rob said he’s opened (shucked) a lot of oysters in his time.

“I used to do a real lot when I was in Port Stephens. That’s how I started working, by opening oysters to make a few dollars. I was reasonably quick. I used to do a box of 20 dozen in about 35 minutes.”

For those doing the math, that’s almost seven oysters a minute. Brandon said some of the industry’s best openers can shuck 40 dozen an hour, or 8 per minute.

When Rob started Armstrong Oysters, growing great product outweighed the need for being a speedy opener. On average, Armstrong Oysters was selling between 600 and 700 bags of oysters annually before Rob retired in 2008. That’s around 720,000 to 840,000 oysters each year.

“When I moved up here, it was just me, so the oysters were put straight into the bags to sell. The boys [Brandon and Jason] decided they would do a bit of opening for customers before Christmas.

“I said, ‘Half your luck, leave me out of it, I’m going home for a beer.’ I’d see them out there pre-Christmas, working until the middle of the night, every night.”

Brandon said the boys knew they could sell some of the oysters for a higher price if they were opened. By doing the tricky and time-consuming job themselves, customers would find their product doubly appealing.

“We were value-adding,” Brandon said.

“Someone’s got to open them. It’s a relentless job.”

“It’s just a straight-out knack. Some people are quicker than others. Simple as that.” 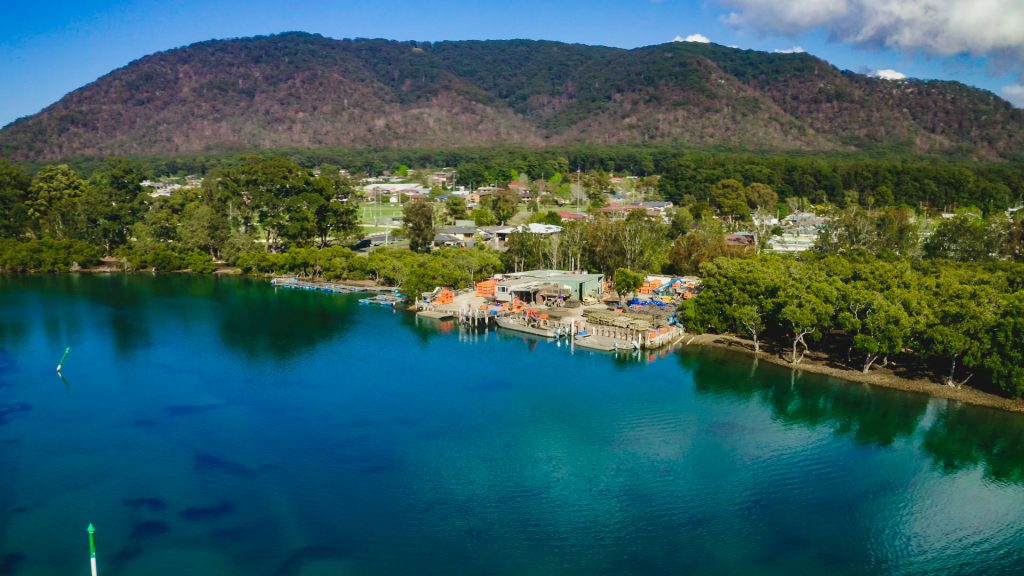 Challenges and the future

“We’ve seen a whole range of things with flooding and low-pressure weather systems. There was a disease that wiped out our crop years ago. We’ve got systems in place to work around and recover from disasters.

“Most farmers have a buffer so that when you have good years, you can get through the bad years.

“With 50 years strong, we could write a book about the ups and downs, but we are here today.

“2020 has been our hardest year, with restaurants being closed for months and then not getting the number of customers as usual.

“There has been an upside. When people really love a good product, they will come and find it. We are seeing more people come directly to us for the product.”

The business has grown from providing oysters mainly to Sydney customers to supplying restaurants in Brisbane, Melbourne, the Gold Coast and Canberra. Around 95 per cent of oysters produced by Armstrongs in the Camden Haven is shipped around Australia. For a time, there was a small retail arm at the oyster shed before the wholesale side of the business consumed the team’s undivided attention. Now, the team welcomes people to buy directly from the farm gate in Short Street Laurieton.

Consumers are becoming more aware of the need to source local food for its freshness, quality and minimal time spent in the back of a truck or on a ship from overseas.

“It’s great to see that the community and people are supporting local produce. It’s great to see locals coming to see us again. Sometimes we’re busy on the water, but I would encourage people to come in, find someone and we’ll open a fresh dozen oysters for you any time,” Brandon said.

“Local buying is all about supporting the local community and really getting to be engaged with what’s around us. We have such a beautiful area with amazing produce, and I think we all are selfish, in some ways, that we don’t get out there and see the local producers.

“We all need to understand what’s around and get that information out to the community, and then going to find the producers. I think, over the next few months and the next year or so, there’s going to be a real push in that direction. We certainly encourage it, and we’ll be doing more ourselves.

“We know there is nothing better than the experience of buying a local product from a proud local producer.

“You can’t beat it when the oysters are coming straight out of the water and directly to consumers, and the experience they get from talking to us and understanding the systems and how we grow an oyster.

“There are great-tasting oysters all over New South Wales, and that’s such a good thing about the rock oyster: they’re all unique in their flavour from different estuaries. Here in the Camden Haven, we have a really salty brine that lingers long in your palette. It just works really well, especially with a bottle of Chardonnay or a beer.” 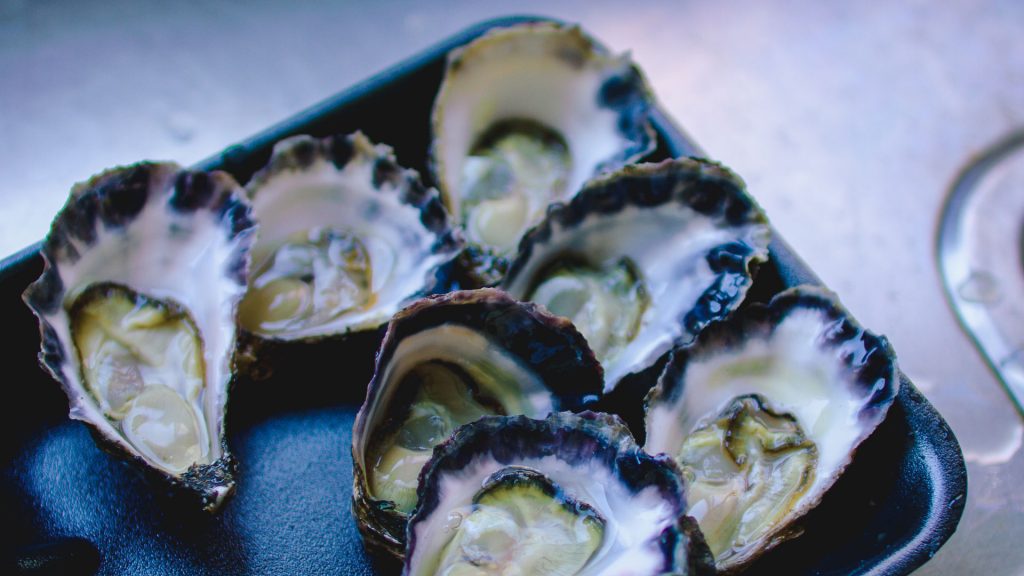